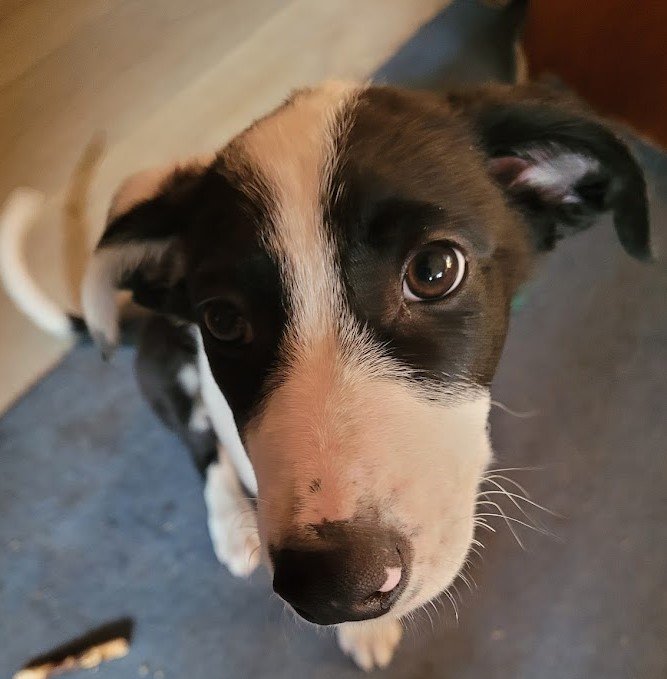 Daffodils are still blooming in my garden, some gorgeous tulips coming through now too. I know I planted them, but it’s still a wonderful surprise when they bloom, adding colour to my view, especially out my kitchen window! I’m always quite keen to have flowers and plants to look at from my viewpoint out my windows, not just to have my garden looking good for everyone else looking at it!

My eldest son turned 18 in early April, so I am now the mother of an adult, maybe not as exciting as the Mother of Dragons! But nonetheless an achievement, he’s coming up to sitting his Leaving Cert. So it will be a year of transformation for him, however his journey begins! We also got a new Hound, as a companion for our first dog – this guy came from CAW – Clare Animal Welfare, we’re not wholly sure what he is, bit of a mishmash, hence his name MASH! We think he’s a bit of collie, bit of whippet, with a long whip like tail. He is keeping us busy trying to house train, himself no.1 Hound DALF are getting on really well, which makes it a lot easier to embrace him into our family.

I’m returning to SETU Yoga studio for a Sound Bath Meditation for the first time in 2 years – Friday April 22nd at 7pm, and Friday May 20th – SETU is in a lovely setting in Clarinbridge, in Kilcornan Woods.

Upcoming dates in Lámh Clinic in May, in Gort town centre

I love holding workshops on Friday 13th, it’s amazing how fearful people can be around this date. This fear is called “triskaidekaphobia”. It’s been said that fear of the number 13 is linked to 12 being a number of perfection? For example, there are 12 months in a year, 12 hours on a clock and 12 zodiac signs, making 13 seem an irrational number that brings bad luck.

There are many theories around why Friday 13th is considered unlucky – from an event in Norse mythology that gave rise to the number “13” being unlucky. The story is that 12 gods were having a dinner party in Valhalla. The trickster god Loki, who was not invited, arrived as the 13th guest, and arranged for one god to shoot another, with a mistletoe-tipped arrow. “Balder died, and the whole Earth got dark. The whole Earth mourned. It was a bad, unlucky day.”.  It’s also been suggested that the superstition comes from an incident that took place way back on Friday 13th 1307, when Philip IV of France arrested hundreds of the Knights Templar. And of course, there’s the belief that it’s from Jesus having 13 for his last supper on Good Friday – which is also the day my eldest son was born on.

A recent radio show from my show RAMBLING with FEE on Loughrea Community Radio, this week’s show I spoke with artist Maria Tanner Cohen, based in Waterford, we talk Celtic circles, the Burren and alchemy of paint!